Edith Clarke was born on February 10, 1883, in a farming region near Ellicott City, United States. In her childhood life, it was a bit different from others; at the age of seven her father passed away while five years later her mom passed away. So then her uncle was become her guardian legally and sent her to a boarding school.

After finish high school at the age of 18, Clarke continues her study journey at the Vassar College in Poughkeepsie, New York. In the college, math and astronomy was Clarke’s degree. In 1908 she finished her college and begin her life as a teacher in a private girls’ school in San Francisco and after that, she taught in Marshall College.

After a few years of teaching, Clarke decided to return back to school and continue another degree in civil engineering at the University of Wisconsin in 1911. At the end of the first year at Wisconsin university, Clarke finds a summer job as “Computer Assistant” art AT&T. During the job, Clarke got addicted to it and quit school to have a full-time work at AT&T.

While working at AT&T Clarke love learning and spent her free time to learn in colleges and university. Some of the degree that she took were radio at Hunter College and electrical engineering at Columbia University.

Seven years later, Edith Clarke changes her journey in continuing her study as a master degree in electrical engineering at Massachusetts Institute of Technology (MIT). After graduated in master degree from MIT, Clarke enrolled in a company calls General Electric (GE) as a role in computer. But in 1921, she left GE and went to be a physics professor in Constantinople Women’s College in Turkey; in 1922 she returned back to GE and work as an electrical engineer. After 26 years of working at GE Clarke shifted her career working as a teacher at the University of Texas.

One of Edith Clarke famous inventions calls, the Clarke Calculator. Historically electric power has a lot of limitation in transmitting to a long distance. Before the Clarke Calculation, the electrical transmission line can go few miles like 50 miles; in Clarke’s report stated, “accuracy is desired in calculations for long lines.” From the quote that stated in Clarke’s report meant that, after her calculator was found, the transmission line can go for long distance like 200 miles and a better accuracy. In 1921 while Clarke was working in the GE, she was found out a mathematical technique that calculates for a long distance transmission line; her mathematical technique is given power system and its behavior the technique is called symmetrical components. From that time on transmission line were getting longer and longer with more and more accurate.

In the past, there were not much of women involving in STEM, but Clarke has a lot of interests in STEM and become one of those women who changed the perspective of women in STEM. Based on different websites, stated that Edith Clarke was the first women who graduated from MIT in 1918. The first women become an electrical engineer professor, the first woman to teach engineering in the University of Texas, and the first woman who were hired in electrical and engineering in the US when she returned back to GE. Throughout her amazing works that she had made and revolutionize the world, she received a Society of Women Engineers Achievement Award. 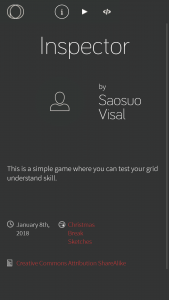 This is the second project that we did in our creative technology expertise. We learned to use a javascript package calls p5.js, which is a package where it allows us to design a lot of shapes and turns into an art canvas. Our facilitator, Waseem, taught us to use it. He challenged us to form a piece of art using p5.js over our Christmas break. Instead, I created a game where the user has to find a hidden dot in the grid.

I started the idea with dots and patterns. Then I began to add some interaction like moving those dots. So then it began to form this piece of game call inspector! Throughout the project, the hardest part for me was to set the position of the hidden dot; I spent about a whole day doing it. As always I like to show an example of the code, below is a function that calculates the number of seconds.

This is how the game looks like, feel free to go to this link to play it: https://www.openprocessing.org/sketch/494199

Every day in English literacy class, our first to do list is the word of the day. In order to become better in English, our facilitator is also improving our vocabulary skills. So one of the words is called manipulation that means, handle or control in a skillful manner; control or influence a person or situation in a clever exploitative manner.

My example is: For my experience, if we get so interest in something people can easily manipulate on you, so you can their product or service.

Most of the day when I’m free I listen to this National Podcast Radio (NPR) of TEDx and one of the topics that interest me is manipulation. In the topic of manipulation, there is a podcast of Tristan Harris: Do Our Devices Control More Than We Think? This is a really cool podcast that talks about how big company like Facebook, Google, Instagram, and Snapchat uses us. It shocked me when Harris give us an example of Snapchat, this application is the number one way that teenagers in America communicate. Harris said, SnapChat also creates a system call Snapstreak where it shows the number of streaks that people communicate. So if a person got streaks they don’t want to lose that streak so every day they just post and post and it’s like dragging them in. This is a really amazing news for me!